WHAT IS FOREX (FX) TRADING?

Before we get into Forex trading – lets understand what ‘Forex’ actually means.

The word ‘Forex’ is created by the mash-up of two words, ‘Foreign’ and ‘Exchange’.

So, what is Foreign Exchange?

The example below will show you what Foreign Exchange is, and why it is relevant to the real world.

In order to make this possible, the British supermarket must convert their Pounds sterling (£) into Japanese yen (¥).

The British supermarket approaches a bank who quotes them an exchange rate of 1:143 (Pound Sterling:Japanese yen), this means that for every £1 they will in exchange receive ¥143.

Voila, here we have an example of a Foreign Exchange transaction.

Another real world example includes that time when you had to convert your Pounds into Euros to buy a pineapple off that guy on the beach in Spain.

What is an Exchange Rate?

An exchange rate tells us how much we will get from one currency relative to another. They are constantly fluctuating due to the market forces of ‘supply and demand’. The more people who buy pineapples on the beach in Spain mean that there is a higher demand for Euros – so the Euro is going to go up in value. 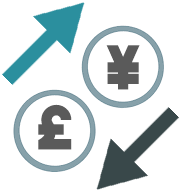 To be a bit more realistic, imagine what would happen to the exchange rate if 10 million British companies all wanted to exchange their Pounds sterling (£) for Japanese Yen (¥) at the exact same time…

The Japanese Yen (¥) would greatly increase in value, due to the huge demand, yet no real increase in its supply.

This means that exchange rates are constantly changing due to the fact that supply and demand levels are never equally balanced. It is this constant fluctuation that creates the basis of Forex trading.

Now – for why you’re really here: What is Forex (FX) Trading?

Forex trading is the buying and/or selling of one currency against another. Therefore, traders make a profit from the fluctuation/volatility of the exchange rates.

Essentially, a Forex traders aim is to buy an exchange rate when it is low and sell it when it is higher (and vice versa). There are loads of different techniques and theories that we’ll be teaching you in this course that Forex traders use to make a profit.

You now know that exchange rates fluctuate due to the market forces of ‘supply and demand’.

So what kind of things affect the supply and demand?

A notable factor is the macroeconomics of a country. This sounds like a more confusing word than what it is actually. This is a essentially the main things that is happening in a country’s economy. For example:

Don’t worry, we’ll be teaching you how to easily find this information and therefore make a trading decision!